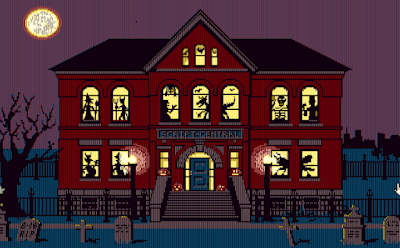 Script-Central is a HyperCard IIGS stack collection presented as a disk magazine. Originally published on floppy disks in the 1990's, v7n2 is the fourth issue published by Brendan Bellina released as 16 MB hard drive images. Stacks include hard-to-find content, stacks converted from Macintosh HyperCard, and original stacks. Along with the stacks themselves is a great deal of information as well as updated instructions on how to create your own issue of Script-Central, if so inclined.

In addition to its regular features: Tips & Trix, the Lounge, Q+A, Scripter's Workshop, the office, the mailroom, and the bathroom, there are a number of special features, some entirely new and some updated versions previously released on Script-Central or online.

Visit https://sites.google.com/view/silverwandsoftware/apple-ii-forever to download all issues of Script-Central Special Edition and other Apple II software by the author.
Posted by Brendan Bellina at 2:57 PM

Brendan Bellina
IT Architect at University of California-Los Angeles (UCLA), IT Services. Author/presenter of over 75 public presentations, white papers, and seminars on Information Technology topics.